Founder of the Lancashire Aikikai

The following article appeared in Fighting Arts International Magazine based on an interview with our previous Principal Mr Marion Mucha written in 1993.

We (the writers) had known about Aikido for many years, having friends who practised it, one even moving to London to learn from a Japanese teacher. Our desire to learn had grown over the years, but we had never lived near enough to a dojo. Then, three years ago, a new Aikido club opened on our back doorstep, even offering a free first session! It was too good to miss.

The club was opened by Andrew Baird, then a 3rd Dan instructor from the Lancashire Aikikai, who had just moved into the area. Classes were small to begin with, consisting of one 4th Kyu and five or six complete beginners. Later, the club, held in a rather bare and dusty 19th century schoolhouse, dwindled for a time to four, three or even two students. But the enthusiasm of those students was high, and the club kept going. Eventually, we were able to offer classes in the local sports centre and with publicity organised by club members, word got around and the club grew to surprising pro-portions. From one night a week with a handful of students we had grown to three nights a week in two venues with classes averaging about 20 members.

As well as practising Aikido we also read books about it, and articles in Martial Arts magazines - mainly 'Aiki News' which was ordered from Japan through the club, and Terry O'Neill's Fighting Arts International which seemed the best such magazine available on the news stands. These articles raised many questions about Aikido and its place in Britain today.

The Martial Arts, as we know them in this country today, mostly have their origins in the Far East - China, Japan. They brought with them Eastern philosophies and attitudes which, over the years since the second world war, have been assimilated and changed to fit our modern world.

There are now many thousands of karateka, judoka and aikidoka up and down the country, practising night after night, week after week. If asked about their reasons for doing so, they would probably talk about fitness, self defence, the challenge... but mostly I suspect the real answer would be that there was something indefinable and fascinating about the 'art' that they practice, that 'hooked' them early on. They are so 'into it' now that they rarely ask themselves why they do it.

The eastern cultures talk about Bushido, the Way of the Warrior, and link the martial arts to profound questions about the nature of existence and man's role in the world. Often we may find these ideas attractive but hard to understand... we are not sure about them and, since we do not want to be hypocritical, we quite rightly treat them with some caution.

We live in a secularised society where the success of science in allowing man to control his world has made us question any ideas which suggest there is more to life than what we usually perceive. If we are to believe in something we want proof, demonstration. Does it really work? This is the test that we should quite rightly apply to all that we are taught. But in doing so are we 'down grading' everything into techniques and losing the spirit and the higher ideals?

O’Sensei Morihei Ueshiba, the Founder of Aikido, was particularly insistent that there was more to Budo than ways of fighting. He was a spiritual man, but much of what he said is difficult to understand and probably almost impossible to translate without losing the real meaning. ....... 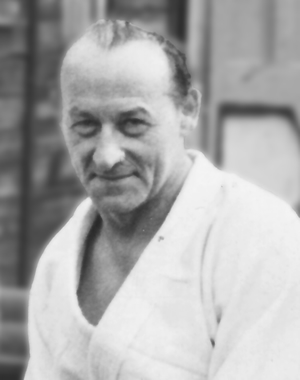 We have been practising for three years now (1993), and asking ourselves these questions, but we are still not yet in a position to pass judgement on the nature of the art. However we are sure that there is more to gain from this or any of the martial arts than just a collection of techniques.

Until we understand for ourselves we cannot really say but fortunately there is always the option of asking those who have achieved a high level and who have trained under the masters of the art. F.A.I. publishes articles about such teachers, British Aikido teachers as well as Japanese teachers operating in this country. Some of these teachers we suspected, from their age, must have been known to Mr. Marion Mucha, the head of our organisation, the Lancashire Aikikai. It was not long before we began to think it would be a good idea to interview him, and submit an article to F.A.I. We did not know much about him except that he is a Polish gentleman who settled in Britain after the war and learned Aikido not long after, studying particularly under Chiba Sensei. He had taught all the Dan grades from whom we were learning Aikido, and we were very impressed by the quality of their teaching. We were very interested to learn something about this man, rather than just reading about teachers we had never met.

Eventually we plucked up courage to ask Mr. Mucha if he would be willing to talk to us about his life and his feelings about Aikido today, and he agreed. It was a worthwhile experience, and has increased our appreciation of his teaching and his contribution to Aikido in Britain.

Marion Mucha was born in Niwaka in Poland in 1919. When a child his father, who was a butcher, found that the inflation brought on by the Depression meant that they had to leave Poland in search of work. They moved first to France and then Belgium where his father found work as a miner and then started his own business.